Milan, 14 July 2016 – The Piaggio Group continues to expand on fast-growing high-volume markets, with the entry on to the Indian scooter market with the Aprilia brand.

Over the next few days, marketing will begin of the Aprilia SR 150 sports scooter in India, whose scooter segment is the largest market in the world, with annual shipments of almost five million vehicles in 2015 and growth of 20% in the first half of 2016 compared with the year-earlier period.

“After the success of the Ape and the positioning of the Vespa in the premium segment of the Indian market, we are further strengthening our offer in the subcontinent with the entry on to the Indian market of the Aprilia SR 150 scooter,” said Piaggio Group Chairman and CEO Roberto Colaninno. “This vehicle is an excellent expression of the Noale manufacturer’s sport expertise and offers technological and style features superior to those of its direct competitors in its segment.”

The Aprilia SR 150 will be competing in a segment that is growing even faster than the Indian scooter market as a whole and enabling the Piaggio Group to pursue an industrial and commercial strategy that includes lighter sports engines, in line with the best tradition that has ensured the success of the Aprilia brand since it first entered the market.

The Aprilia SR 150 combines the feel of a sports bike with the ease of use of a scooter; it was designed and engineered in Italy and builtin the Piaggio Group’s Baramati facility, in the state of Maharashtra. With all the typical features of the brand’s unmistakable sporty personality, the Aprilia SR 150 has an aggressive style and delivers performance at the top end of its category, thanks to its modern dynamic 4-stroke, single-cylinder 150cc engine. Aesthetically, a distinguishing characteristic are the large 14” five-spoke wheels, whose decisive racing design echoes Aprilia’s competition bikes, stars of the MotoGP circuits.

The new Aprilia SR 150 addresses a modern, dynamic, internationally oriented target, a new generation of young Indians who are driving economic and social growth and change in the country. Aprilia’s sporty soul, formed in the top motor-racing championships and reflected in 54 world titles, is an accurate expression of this generation’s ambitions and personality. 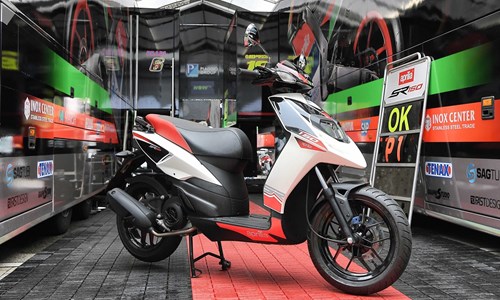